#LaCosteStrong Update - Don't Give Up! - All You Need is Love 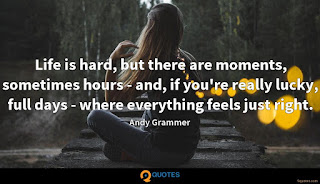 On September 18th, I wrote a blog, "#LaCoste Strong - A Community of Love, Kindness and Big Hearts" featuring how a community came together to support Kevin and Ali LaCoste and their beautiful family following a fall that led to a traumatic spinal cord injury.

I feel goosebumps all over as I share this update with you.

On September 28th over 1100 people gathered for the 6th Annual Middlemiss Big Heart 5K. A portion of the proceeds went to their first ever race beneficiary, The LaCoste family.

There was not a dry eye on the field as Kevin addressed the crowd over the loud speaker:

"I'm a little sad I can't join you but next year I will definitely be there to celebrate Joseph and all the beautiful things he has done to inspire us even in his short life. Today... today while you're out there think about something you're grateful for and find a way to do some small kind act this week. Not only do the kind act but really think about how it made someone feel and think about how it made you feel as well. I hope everyone has a great day today and most importantly if you see Jack Middlemiss tell him I'm looking to kick his butt when I get home."

That last comment about Jack was in reference to a Q and A Ali had back on September 20th in which we were able to ask Kevin both light hearted and serious questions. Ali limited the questions to 10 but just had to include a Bonus Question from Jack:
11. Bonus Question!!!!! What are you going to do when I come to Spaulding and kick your butt? (Jack Middlemiss)

Kevin: I’m going to ride circles around you in my wheelchair until you get dizzy, then I’ll push you down, and kick your butt!!!! Do you want to piece of me? Or the whole thing?

I was blessed to accompany Ali and Kevin to the Abilities Expo on September 13th. Kevin and Ali had the opportunity to explore resources and equipment that would improve their quality of life as Kevin recovers from his injury. 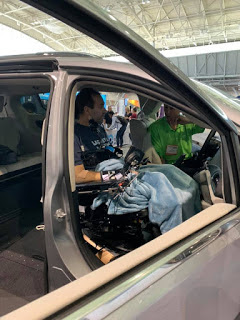 As Kevin readied for discharge from Spaulding, Ali posted this about their new van:

Because of the wonderful people in our lives, Kevin and I were able to purchase a vehicle that will allow us to have the freedom of a “typical” family. Though the idea of driving a “mom-van” has never thrilled me, this car is completely awesome. The front seat pops right out, so that Kevin can ride up front where he belongs.

When he tried it out today, he navigated in and out of the car with such ease. He’s already a pro at figuring out this new challenge of his!

For those who have donated, fundraised, bought a t-shirt etc. Thank you. You took so much stress away from the pain of car-buying. You’re allowing me to help transport my husband in style. 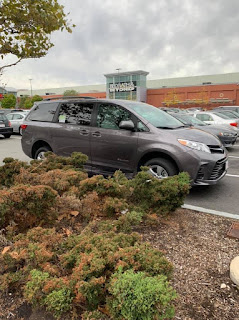 The day everyone was waiting for happened on October 12th. Kevin was discharged from Spaulding Rehab Hospital after spending 83 days away from his home. 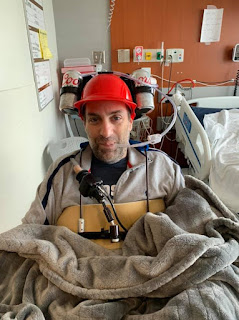 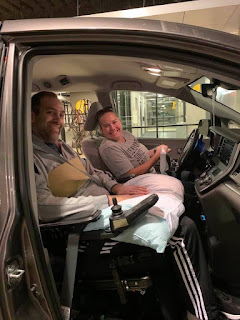 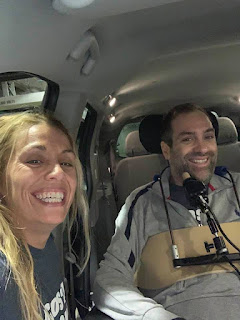 All the money was raised and crews worked tirelessly around the clock to make sure that Kevin would return home to a house that was accessible for him.

You & Me: We got this. That’s the sign that Kevin and I walked in to see in our beautiful new bedroom this past Saturday. I’ve repeated this statement to Kevin and to myself countless times over the past 3 days. I’ve wanted to reach out to you all and tell you that everything has been great. That our transition was seamless and it’s been easy. I’ve wanted to tell you that I’ve been an amazing caretaker and Kevin couldn’t be in better hands.... but I’ve been honest with all of you from the beginning, so I’m not going to start sugarcoating things now.

Saturday we came home to our dream home. Love and kindness radiated from every part. Signs lined the streets- made by the children who Kevin has influenced in some positive way. We were driving our new car that fundraisers helped us purchase. We were accompanied by my sister in law Lori LaCoste O'Donnell and brother in law Craig O'Donnell- who wouldn’t have let us travel that road alone. We came home to our excited children and my parents (Gail Buccini). We were joined by Kevin’s mom(Brenda Taylor LaCoste). There was so much love- along with a mix of emotions- fear, sadness, happiness, and uncertainty.

On this day of our return, when Kevin exited our car, he went in the opposite direction- away from the house. I had no idea what he was doing. He went onto the road and stopped in front of the tree where the accident happened. He paused for a while, released some tears and reflected on the fleeting moment in time when he was trying to be a silly dad and it all went wrong. And then he rolled into his new beautifully accessible home- with deck and patio to boot.... and shed some more tears, for a different reason this time.

The few days we’ve been here have been completely overwhelming. But with each day we know things will get easier and more routine. We know that in times of need, we have a HUGE army of supporters. And in due time, we’ll be calling on all of you to check in on and visit us. ❤️💜❤️  

I can’t say that things will be perfect or that we’ll know what to do with every twist and turn.

What I can say with an open heart and true belief is that Kevin and I do “got this!” There is so much love in our home and surrounding us from all aspects of our lives. All four of us sleeping under one roof is a dream come true- no matter the circumstance. 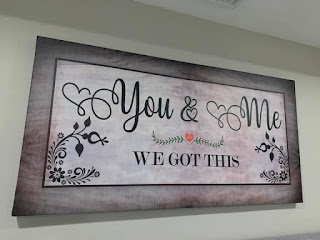 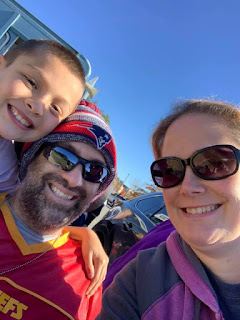 They went to a friend's house to watch Patriots Football: 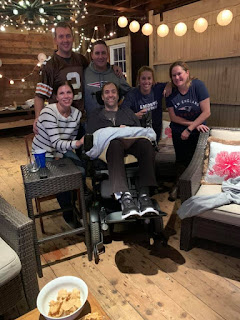 Right after Kevin’s accident I often thought of how was I ever going to be strong enough to get through this. I knew that I needed support, so I did some online research and found a few Facebook support groups. I quickly joined them and read the experiences others have handled- and tried to imagine the tumultuous road that we were destined to travel.

Most upsetting about some of these posts was that many complained that their friends and families abandoned them in their time of need. Now, I understand that every story is different and people handle problems in their own ways, but I couldn’t help but feel heartbroken. And I also felt so fortunate that I knew that would never happen to us.

Tonight, my feelings were affirmed. We had friends who sought us out, made sure they had space that Kevin could get to and had us over for a “normal” Patriots game viewing. The room was cozy, the fire blazing (which is good because Kevin is so often cold). We had munchies, beverages, and good conversations. Jonathan Ash and Colleen Donohoe Ash have proven to be true friends and in this new world we’re navigating we need them now more than ever. ❤️

It goes without saying that Lori LaCoste O'Donnell and Craig O'Donnell are also in it for the long haul. But we’re pretty happy that they’ve been hanging around a lot too. 😘
#LaCosteStrong

They were reunited with Kevin's inpatient team at MGH ICU, some of whom had never heard Kevin's voice because of the tracheotomy, when they went for a follow up visit with Kevin's surgical team: 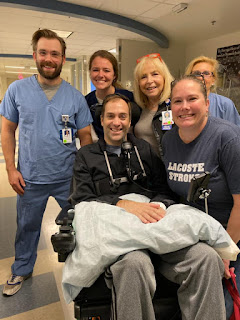 Lisa Hughes and David Wade did a follow up story on WBZ that you can watch with a box of tissues by following this link.

Kevin Staffin exceeded his goal of $3000 to raise money for his dear friend Kevin and had to man up to his part of the deal that if he reached his fundraising goal (and he raised $3781) before he ran the New York City Marathon then he'd have to don Red Sox gear and make it his Facebook profile picture for at least a week! Kevin S. is a die hard Yankees fan. 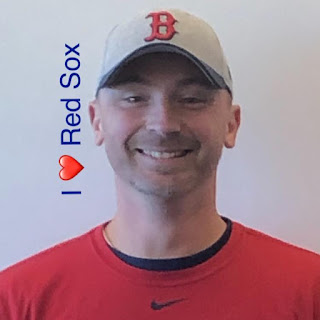 Here is his finish photo from the Marathon which he dedicated to Kevin (notice the red socks): 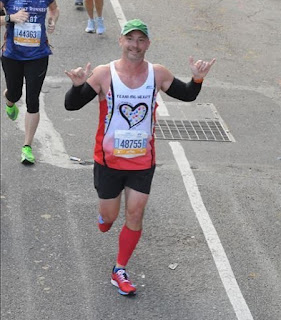 We are so happy to announce that, tomorrow morning, Mr. LaCoste will be coming to the Robinson School for a visit. We will come together as a school community in the cafeteria, and Mr. LaCoste will read us all a fun story and talk about the different SPIRIT core values the story addresses. We all look forward to spending some time with Mr. LaCoste!

Students are encouraged to wear a "LaCoste Strong" shirt, or a blue/gray-colored shirt, for this special visit.

This will, hopefully, be the first of many visits from our beloved principal. 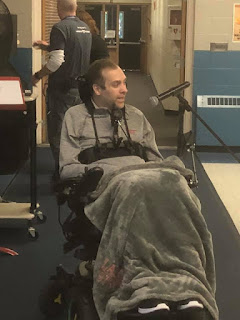 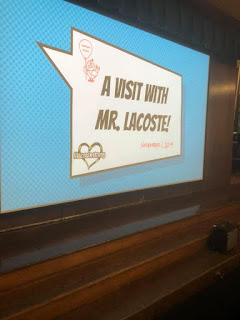 I had a feeling it was no coincidence that Kevin was returning to his school on the day that Andy Grammer was going to be in Boston for the last concert of his Don't Give Up Tour.

Kevin's Army as we have come to be known flooded Twitter and Instagram with messages to Andy Grammer about why he should connect with Kevin while in Boston. With the help of angels both on earth and in heaven, including Erin O'Malley Mandeville of Boston's Mix 104.1, Andy Grammer sent this message out to Kevin and the Robinson School:

Here's the full video of Kevin's return to his school. I highly recommend you watch the entire video and feel the love surrounding but if you fast forward to 7:43, you'll see the kids singing Don't Give Up on Me to Kevin and then the surprise video from Andy Grammer:


Life happens. Tragedy strikes. Somehow with gratitude and faith, kindness and a village surrounding we don't give up and make it through.

All you need is love and as we follow the journey of #lacostestrong we see that theme resurface time and time again.

You can donate to the LaCoste Strong GoFundMe page by following this link.