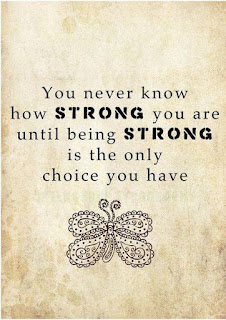 Facebook reminded me of this post from one year ago:
It's been quite a day. I must say that on the whole grace is greater than the unbelievable situations I encountered today. I remembered to maintain equanimity in the face of a**holes and that there are so many wonderful people in our village and in the Brookline community. A huge shout out of gratitude to our Emergency Responders Brookline MA Police Department who once again responded with compassion to Ruth Anne's crisis that required hospitalization. For those of you counting that's #5 since February. Her new DMH worker seems wonderful and I am hoping that DMH will step up to the plate especially after alleged inappropriate behavior by her previous worker who also was incredibly ineffective in his role. But I am also hoping that Ruth Anne will step up to the plate and do the work necessary for recovery. I am praying that the Team will change meds to give her relief and give her the boost she needs so she can do the work. I am exhausted after cleaning and laundry and many many phone calls today and continuing to ensure that her interests are protected but I feel so blessed and grateful for all the amazing people that I DID encounter today. Thank you ALL for your love and prayers. Please keep them coming. She is on 5W at St. Elizabeth's in Brighton.
Time for a good dinner, a hot shower and unwinding time.

There would be many more crises and 9 more hospitalizations until I found the missing puzzle piece in August of this year.

When Ruth Anne first entered the world of psychiatric hospitalizations, the OT's recommended that we do jigsaw puzzles to help with anxiety and to ease her off of her compulsion to go on the internet that triggered a worsening of psychiatric symptoms.

For 2 of the several puzzles we worked on, we were missing the last piece.

One piece we found under the sofa stuck in the radiator.

Despite turning the house upside down, we could not find the other puzzle piece.

One day we were cleaning out our car and lo and behold, there it was!

I taped it to my journal that we bought from Dr. Joe Dispenza's store. 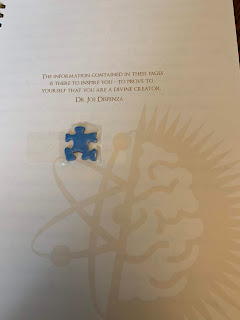 It was a reminder to stay connected to the Divine even in the situations where there seemed to be no hope. Appearances, as I have learned throughout my healing journey, are not what they seem.

We rode the waves of crisis after crisis. We prayed and asked our friends for prayers. We wanted relief for Ruth Anne and for us.

I met Anthony Espina years ago at a Christmas Fair in Boston. He was here with his mother to explore Berklee College of Music. He didn't get accepted and will be the first to tell you that it was the greatest blessing in his life. He posted on Facebook that he was proud and honored to have written the score for the movie, "My Kid is Not Crazy." You can listen to the compelling and moving score on his website.

Our dear friends posted about their 6 year old daughter who was experiencing alarming symptoms of behavior change, restricted eating, not being able to put on clothes and a radical personality change. She was diagnosed with PANS.

Ruth Anne was complaining of symptoms of UTI's and an ear infection at different times throughout the course of those months of hell but, because of her dire psychiatric symptoms, no one was paying attention to working up possible physical causes for her condition.

And then a light bulb went off for me.

I remembered Ruth Anne's history of strep and chronic infections and how, at the age of 6, after having her adenoids removed and having had tubes in her ears, her kindergarten teacher asked me what happened to Ruth Anne. She had difficulty paying attention and would "space out" and her once outgoing, fun loving personality seemed to all but disappear.

We were blessed with a first grade teacher who took great pains to help her learn how to read and we hired a tutor.

At her third grade parent-teacher conference, her teacher welled up with emotion as she showed us samples of Ruth Anne's work. She wrote in yellow crayon all over the page in barely legible handwriting. She was upset she did not know about Ruth Anne's history of hearing loss which had been corrected with surgery or her struggles in earlier grades. We had Ruth Anne tested and placed on a 504 ed plan. She was diagnosed with ADD and Ritalin was recommended. We don't know what we don't know. The Ritalin fueled the fires of her food restriction that occurred after strep and pneumonia. She underwent testing at MGH, taken off Ritalin, diagnosed with GERD and placed on high doses of prilosec. An earth angel of a teacher, an Occupational Therapist and a few wonderful special education teachers helped her to graduate high school.

Things seemed to quiet down as she received an Associates Degree from Bunker Hill Community College with help from on campus tutors and support from me at home. She went into a deep depression when her plans to move to California fell apart after graduation from BHCC.

She decided she would go to Middle Tennessee State University, get in state tuition, work and go to school and follow her passion in the Country Music industry. She struggled through the days and would ask for plane tickets to come home and to Face Time with us on a daily basis. She got painfully thin and became obsessed with yoga and exercise. Yet somehow she managed to make it through and graduate with high honors.

When she returned home, the proverbial wheels fell off the wagon and two years after she came home the cycle of hospitalizations, med trials and error with mostly error and wondering what was going on began.

With this last siege of crises and the Universe pinging me about PANS, I did my research. I reached out to her primary care provider who promised me he would do a work up for the UTI's and would consider the possibility of long term antibiotics. He shared my hypothesis with her psychiatrist.

On September 6th, after her 14th and final hospitalization, her urine had an exceptionally high white blood cell count. Despite a negative culture, her PCP started her on high doses of antibiotics. I started her on ibuprofen 3X/day and adjusted her psych meds based on her presentation post discharge. St. Elizabeth's discharged her without doing the urine culture as I requested and she was not on a therapeutic level of her meds.

After a week and a consultation with a urogynecologist, and staying off of the internet which is a trigger for hallucinations and psychiatric symptoms given the brain inflammation, she began to clear. We hit a speed bump when she went back on the internet and had a therapist who was enabling her and allowing her to keep her behaviors secret which is all a part of OCD and PANS. Ruth Anne finally told us what happened. We fired the therapist, the Department of Mental Health worker and the social worker from the police department all of whom were unhelpful because they did not understand PANS and were creating conflict within Ruth Anne.

When I accompanied her to her appointment with her psychiatrist, she told him she was doing much better.

"That's a blessing," he said and asked what else he could do to help.

He made sure she has a new therapist and that a referral to Occupational Therapy was in place. He put in for med refills and said that if there's anything we need to reach out to him. He also told us that he never believed the diagnoses of schizophrenia or bipolar disorder but could not figure out what was going on. He treated me with great professional courtesy and Ruth Anne with the dignity and integrity she deserved all along.

She is running again although it is slow going as she begins the marathon of healing mind, body and soul. 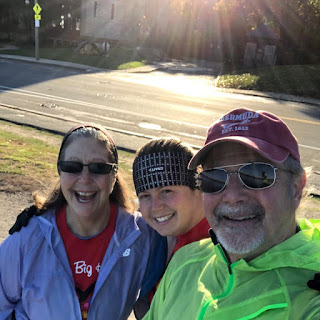 She'll be running the Somerville Jingle Bell Run 5K and the Hyannis 10K with Tom both BA Event Promotions events that welcome all paces for their races.

She volunteers and for the first time in 5 years believes she has a future although she is keenly aware of the toll PANS has taken on her brain.

We take it one day at a time giving thanks and feeling blessed for when things go smoothly and take deep breaths as we get through the tough miles that come with PANS.

Ruth Anne has a long road ahead but she is past the starting line of this marathon of healing now that we have found the missing puzzle piece.

Ruth Anne has given me permission to share her journey with the hope that it can help someone else!