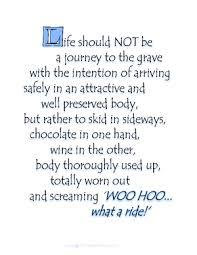 When Ruth Anne and I put on our running tees before heading out on yesterday's run, I hadn't realized that yesterday was the 5 year anniversary of when I made a solid commitment to running the Bermuda Half Marathon in 2016. 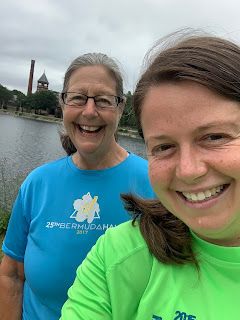 In December of 2014, I sustained a very serious knee injury. I had not been cross training and I was pushing myself with 9 races in 9 months trying for PR after PR. The MRI findings were not pretty. Imaging indicated torn cartilage beyond repair, a fatty lipoma, degenerative changes due to prior surgeries, bone spurs, an atrophied gastroc muscle from polio and osteoarthritis. Arthroscopic surgery would not be of benefit. I should stop running or cap my distance at a 5K and prepare to have a total knee replacement in a few years. I was referred for physical therapy and was blessed to meet the physical therapist from hell because I needed to get back on my healing path that was set in motion in February of 2007.

The Universe led me to a healer/chiropractor who was excited to partner with me using chiropractic care and the mind/body connection. He helped to get me back on the roads and at my comeback race, Finish at the 50 5K in July 2015, this happened...

From "The Adventures of Runnergirl 1953":

Anthony Raynor and Clarence Smith had me at hello at the Bermuda Marathon Weekend Booth at the Finish at the 50 Expo. Tom started chatting with Clarence "Stoker" Smith. I hung back but cocked an ear to the conversation. I gingerly eyed the pink Bermuda wrist bands, the bling from Bermuda Marathon Weekend races and the samples of pink sand. I glanced at Tom and felt we each had a tug at our souls. The tug got stronger with each moment we talked with Clarence and Anthony. We reminisced about when we went to Bermuda. I felt goosebumps and a warm feeling come over me, while a part of me was wondering why was I even having this conversation about running in Bermuda. Several months ago I was told to cap my distance and prepare for a total knee replacement.

“If you can get up to the Half Marathon distance, you’ll be better off than running the 10K with all of its steep hills,” Anthony said in his delicious Bermudian accent.

“The last time I was in Bermuda I was in a leg brace using a cane and a wheelchair.”

There was no stopping me now. We exchanged information. Clarence told us he'd pick us up at the airport. I chatted with Anthony about the weather in January.

"Look," he said with a deep warm laugh, "I was told you people still have piles of snow near the Seaport Hotel from this past winter. I can guarantee you this. You will have no snow in Bermuda in January."

“Twenty years from now you will be more disappointed by the things that you didn't do than by the ones you did do. So throw off the bowlines. Sail away from the safe harbor. Catch the trade winds in your sails.” ~Mark Twain

It was time to sail away from safe harbor and go the distance again. This time on the magical Island of Bermuda.

“Running is about finding your inner peace and so is a life well lived. Run with your heart.” ~Dean Karnazes

Facebook reminded me that on July 6th, 2015, I booked our hotel and airfare and laid out a training plan to run my first half marathon since crossing the finish line of the 2009 Boston Marathon!

I went on to run not one, not two but three consecutive Bermuda Half Marathons in 2016, 2017 and 2018. We became fast friends with the Bermudian running community and American runners who traveled to Bermuda every year for Race Weekend. 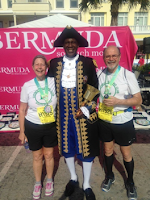 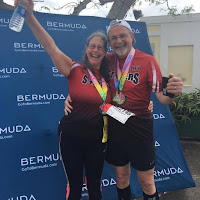 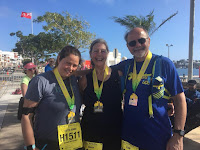 As for that total knee replacement, not happening! Through visualization and meditation, chiropractic care and a new strength training regimen along with being more mindful about what goals I set for myself, my knee is healed and I've grown a new gastroc muscle to help power me through my runs.

Five years ago I followed Mark Twain's advice because I knew that I would regret and feel disappointment by the things I chose not to do. I knew it was time to sail away from safe harbor and once again challenge myself to go the distance.

My books chronicling my journey of transformation on the roads and in my life are available on Amazon.