Synchronicity at the Starting Line - Part I 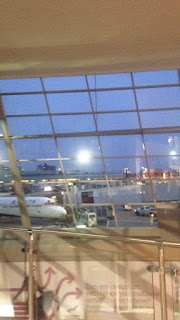 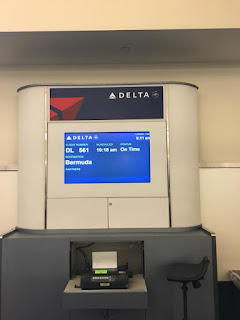 Team McManus was trained, poised and ready for the Bermuda Half Marathon happening on January 17th.

Despite the doom and gloom prediction from my "Team" after a very serious knee injury in December of 2014, I once again defied a diagnosis and prognosis and was ready for take off on a new leg of my quest to heal mind, body and soul from the effects of paralytic polio and trauma.

"I'll let you," the gentleman quipped.

"No," he said, "I'm the race concierge.... "She's running" pointing to the woman in the seat directly behind him.

We settled in for the flight.

As we began our descent to Bermuda my breath caught. The last time I had been to Bermuda I had a wheelchair waiting for me at the bottom of the stairs on the runway. I was wearing a toe up leg brace

and used a cane.

On this day I was wearing Altra running shoes and had spent 6 months training for the 2016 Bermuda Half Marathon; the longest distance I had run since the 2009 Boston Marathon! 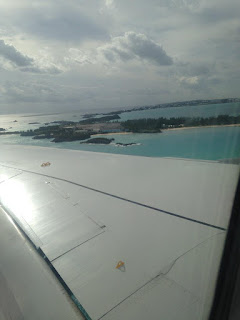 We said goodbye to our plane-mates who we learned were from Kentucky and were focused on our Bermuda adventure.

As we walked along Front Street on Friday, we bumped into our Kentucky plane friends again. Well, after all, Bermuda is a small Island.

One of the things I love about going to Bermuda is reading The Royal Gazette. What a thrill to be a part of International Race Weekend and to see our names in the paper: 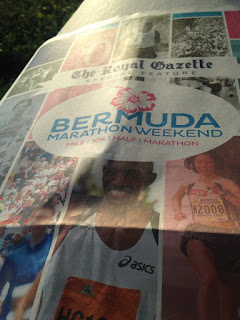 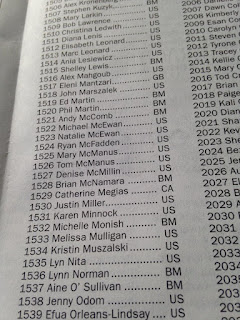 From "Going the Distance: The Power of Endurance":

We woke up at 5:45am on race day. The Rosedon Hotel, our home away from home, had a continental breakfast starting at 6:30. They usually don't serve breakfast until 7:00 but as happened throughout the weekend, everything we needed was set before us. There was wonderful energy in the main house as runners were getting ready to walk down to the starting line. This was our first international race and our first destination race yet one that we had imagined over and over and over again while we trained. We saw the sunrise over Hamilton Harbor and felt the excitement of race day! I was feeling serious pre-race jitters feeling like I might throw up before the race. We rushed our breakfast because we were in a hurry to get to the starting line. I took a lot of deep breaths and engaged in positive self talk as Tom and I walked around taking pictures of this miraculous moment.

"Hey there. I was determined to find you this morning. What are the chances that we would have our bib numbers in sequence?"

I was a little stunned to say the least. On the flight from Boston Tom and I met Denise and her husband from Kentucky. He was her support crew. We also bumped into them on Front Street on Saturday.

"I was on Instagram and looked for the hashtag #runbermuda. I saw the pictures you posted."

"What? I deactivated my Instagram account yesterday because I was frustrated and couldn't figure out how to use it."

"So I saw your photos and I found out about you and I said prayers for your health last night and wished you a wonderful run but I was determined to find you this morning."

A sign from God that I could relax and let go knowing that my body knew exactly what to do to run 13.1 miles. 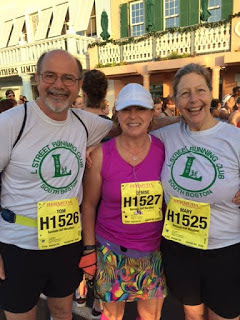 We became Facebook friends and were both in awe of how the Divine orchestrated that miraculous moment!

From "The Adventures of Runnergirl 1953":
As the cab pulled up to the Bacardi Headquarters, we saw everyone gathered on the outside patio for the kick off to Bermuda Marathon Weekend. There was an open bar and appetizers being passed around while announcements and introductions were made. After the formal program, Tom and I strolled down Front Street to The Pickled Onion. There was a gentle breeze and we wore a short sleeve shirt and a sweater. What a blessing to escape the New England winter in the middle of January. We were going to meet a very special person and her “running wife” for dinner.

We hadn't planned on going into Hamilton on Thursday but once we received the invitation to the reception shortly before we left for our trip, we knew we had to change our plans. On a whim I messaged Denise McMillan to see if she wanted to meet up for dinner. When she let me know she was returning to Bermuda for this year’s race weekend, I let out a screech that could have been heard from Boston to Kentucky. I suggested we meet for dinner at The Pickled Onion after the reception. Denise and her "running wife" Lanette were staying in Hamilton.

After we ordered, Denise shared the story of how she found me via Instagram even though I wasn't active on Instagram on the eve of the 2016 Bermuda Half Marathon. While occasionally glancing up to take in the scene of the beautiful Bermuda Harbor, Denise became animated.
"There I was looking for the hashtag runbermuda."

She inserted her own music while tapping her fingers on the table.

"What were the chances that our numbers would be in sequence? I 'followed you to Facebook' and when I read your story I was moved to tears. I prayed for your health that night and knew I had to find you the next morning.”

I was enthralled to hear her recount the story without the filter of pre-race jitters. After Denise shared the story and before our dinner arrived, amidst laughter and joy in awe of what brought us together, Denise went into her bag.

She presented me with a box. “Never bought, only given.” Inside was a terrycloth sweat wristband engraved with one word, “INSPIRE.”

As she told me the story of how she submitted my story to Run the Bluegrass to get the wristband to bring with her to Bermuda, the tears streamed down my face. I was a puddle of tears of joy and gratitude. I joked that they should move the bread out of the way before I made it soggy.

"I met Mary on a plane from Boston to Bermuda in 2016. She overcame unspeakable trauma as a young girl, post polio syndrome as an adult and yet trained to run the Boston Marathon as a mobility impaired runner. She is now training for her 3rd Bermuda Half Marathon. She blogs about running, volunteers for local Boston races and I plan on seeing her again in Jan. 2018 in Bermuda as we both tackle that race. I recently bought her a RTB {Run the Bluegrass} shirt to take to her. She's truly an inspiration to anyone that is lucky enough to cross her path."

Hours passed as we dined on delicious food, laughed and talked about all things running and life. Despite being up since 4:30 am to travel, we were all energized by the love, the gratitude and the inspiration that was the weave of the tapestry that created strong bonds for us as running family.

We said good night, wished them well in their first two legs of the Challenge, and that we'd see each other on Sunday morning before the Half. 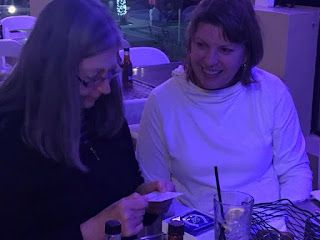 We were able to find each other at the starting line of Sunday's race. Denise was completing the Bermuda Triangle Half Challenge and Lanette was running to complete the Full Challenge. 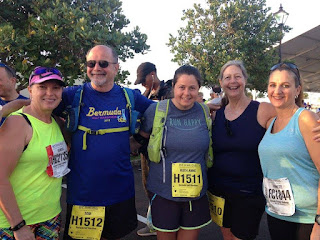 Denise cheered us into the finish after she had finished her half and was waiting for Lanette to finish her marathon.

We went back to our Hotel and stayed in touch while we were on the Island. After we returned home we continue to nurture our friendship through Facebook.

I continue to feel awe when I see all the things that had to align in order for us to experience that moment of synchronicity at the starting line!

From my heart to yours
In Health and Wellness,
Mary

My books are available on Amazon and "Feel the Heal" and "The Adventures of Runnergirl 1953" are available in Natick Center Cultural District at Paula Romero Dunbar's Celebration Boutique Paper Fiesta coincidentally located on Mile 10 of the Boston Marathon Route. Proceeds from the sale of books for July are being donated to The Joseph Middlemiss Big Heart Foundation to support Tom's Falmouth Road Race. You can also donate directly by following this link.