At the Expo, I huddled with Carolyn and Brian Baker, parents of Ainsley Baker who was turning 15 on Sunday. Brian posted on Facebook about how they had to balance out the celebration of their daughter's birthday with race weekend. I asked them if it would be okay to have everyone sing Happy Birthday to her before I began my speech at the Pre-Race Pasta Dinner. They said she would be delightfully embarrassed. The ballroom filled with many of my runner friends including Dominic Herard who was inspired to come to Hyannis from my posts, Mary and Ted Tyler, Ric Beaudoin, and the Bakers with their friends (and my new friends) the Sims. What a wonderful way to begin my speech after a wonderful introduction by Tony Myatt.

I had carefully crafted my speech and rehearsed it but the Tuesday before the weekend, I knew that I needed to revamp the entire speech and I am so glad I did.

I began with sharing how my life came to a screeching halt in December of 2006 with the diagnosis of Post Polio Syndrome, a progressive neuromuscular disease. I shared the power of the mind/body connection by having the audience members imagine taking a taste of a lemon. I could see from their faces that they understood the power of the imagination.

As I read the poem I wrote after getting still and asking for Divine Guidance shortly after the diagnosis, a hush fell over the ballroom:
Running the Race

Early summer 1959 my kindergarten year
everyone around me filled with nervous fear.
Despite the Salk vaccine hope polio would disappear
the polio virus crept right up and knocked me in the rear.

Dancing all around the gym feeling free just like a bird
I dropped to the ground just like a stone and no one said a word.
The pain it was so searing-the diagnosis even worse
"It's polio" the doctor said...he was abrupt and terse.

Called one of the 'lucky ones' I had a 'mild case'
but with the other athletes I could never keep their pace.
Miss Holly physical therapist, curly hair and a warm, broad smile
it tempered the pain of being apart - to walk I'd take awhile.

I always wore those 'special' shoes the kids they poked and teased
with no support and much abuse with childhood I wasn’t pleased.
But put nose to the grindstone and learned all that I could
I couldn't kick a ball but my grades were always good.

Years went by and no more thought to polio did I give
I accepted the limp, everything else and decided my life I would live.
But symptoms of weakness and muscle pain did grow
I kept a stoic face hoping no one else would know.
Life no longer was my own I struggled through each day
suffered in silence, alone and afraid tried to keep depression at bay.
And with the grace of glorious God my world it opened wide
I discovered there was a Post Polio team and they were on my side.

Sought out paths for healing and my spirit flew free
for the first time in life, I could truly be me.
The chains are gone and possibilities abound
I'm a tree with my roots planted firmly in ground.

Using wheelchair to travel, set limits on what I could do
resulted in joy to realize I could live life anew.
Celebrated my body-creaks, groans and need for a brace
while in my mind I focused on winning a 10K race.

I'm now off the sidelines, no need to sit and whine
so much gratitude fills my heart and love and beauty shine.
After all these years I can join the loving human race
I exceed all expectations and now I set the pace.

I painted a picture of how debilitated I was and the journey of transformation I experienced that culminated with my 2009 Boston Marathon run.

Every finish line is a starting line and I shared how I had to find the courage to start again after a debilitating knee injury in December of 2014 to go on and run the Bermuda Half Marathons in 2016, 2017 and 2018.

I was deeply moved as everyone stood up after my talk. 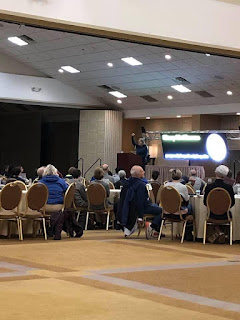 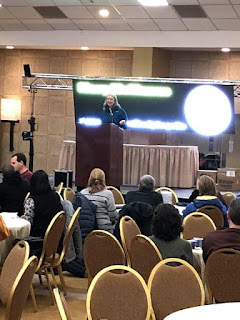 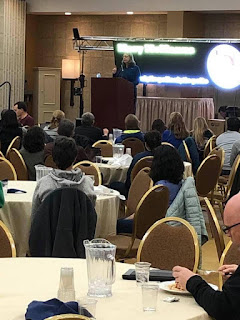 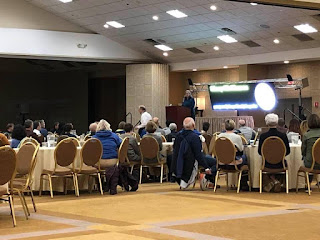 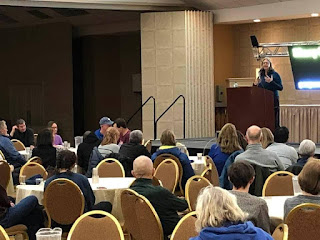 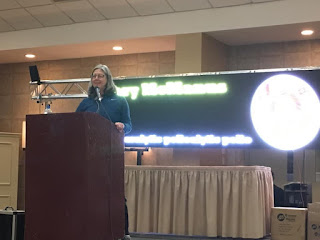 I stayed on the stage while Tony introduced Bill Rodgers and was quite overcome with emotion to hear him talk about my journey. He shared with the audience how he read my book, "Going the Distance: The Power of Endurance" that I gifted to him in 2017,mbefore coming down for the weekend and although he had known about my history of polio, he was unaware of the abuse I endured. He contrasted his running journey which started with him chasing butterflies to my journey. 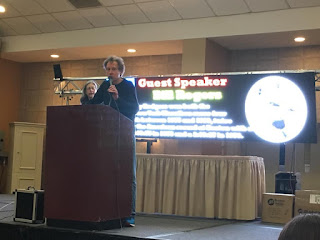 "You know nowadays if you watch TV, you see all these advertisements for pills and that they will magically restore your health. But we runners know otherwise don't we?"

Bill said that one thing that struck him about my journey was that he didn't hear any anger. "I'd of been pretty pissed if I would have gotten polio." I shared with him and the audience that part of my healing was to use forgiveness and gratitude rather than anger.

Bill talked about the power of community and how my journey especially reminded him of Wilma Rudolph's quote, "No matter what accomplishments you make, somebody helps you." He referenced how we runners sure do love our physical therapists and how fortunate I was to have found people to help me along the way especially since the people who were supposed to help me, hurt me.

"You know I loved Albert Einstein's quote that Mary used in her book. I wish I could have met him although I probably wouldn't have understood a word he said. You can either live your life as though nothing is a miracle or everything is a miracle. Mary sure is a miracle."

During the Q & A period, one woman asked me for more specifics about my meditation practice. I told her about the Healing Resources page on my website while sharing the visualization techniques I used.

Bill wrapped up the evening by suggesting that everyone go home and get some rest. "You know," he said, "Coaches nowadays are just learning about how important it is to incorporate rest and not just push push push."

As I left the stage, people asked me if I had books for sale. They followed me out to the Expo Table where Tom and Ruth Anne helped me with book sales. Brian told me that he doesn't get moved that easily, but my talk brought him to tears. Bill told me someone should make a movie about my journey and that he would email Frank Shorter to let him know the impact he had on me in February of 2009.

Dageii was the woman who asked me the question about my meditation. She said that she had surgery to repair a ruptured Achilles tendon. She was afraid to run again but said that my story inspired her! She was excited to read my book and took a photo of Dr. David Hamilton's book to purchase after the weekend. 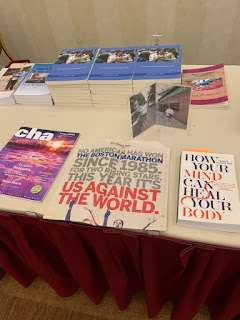 I spotted Liz and Tom in the audience. He was wearing a suit with an open collar ... not your usual dress for a running event. As we walked out of the ballroom she said, "My mom was a polio survivor. She died 3 years ago and today was her birthday." We shared a moment of chills and goosebumps.

Her husband Tom told us about Liz's story as a runner. After the diagnosis of breast cancer, she decided she was going to go the distance of a marathon. Her friend was able to get her a number for the NYC Marathon. Tom told us of how he waited with their children to watch her come into the finish. "Mommy's strong now," he said with tears in his eyes "after seeing their mother so sick going through chemotherapy." They are from the same home town that I grew up in!

What a way to end the day!

Mary McManus
Mary McManus, motivational speaker, critically acclaimed author and poet, 2009 Boston Marathon finisher, polio and trauma survivor has a remarkable story of resilience, healing, hope and possibilities. Every day is a celebration of life for Mary who refused to take the diagnosis of Post-Polio Syndrome sitting down. Her pen became her divining rod for healing harnessing the power of the mind/body connection through poetry. She embarked on a journey that took her from taking a leap of faith, leaving behind her award-winning career as a VA social worker, to the finish line of the 2009 Boston Marathon, and many adventures as a woman transformed through the sport of running. Mary has shared her story on many podcasts and radio shows, including the award-winning Exceptional Women radio show. Mary was featured on Boston’s Channel 7 after her inspiring Boston Marathon run, is featured on the Heal Documentary website and featured in best-selling author Dr. David Hamilton’s book, “The Tenth Anniversary Edition of How Your Mind Can Heal Your Body.” Recently, she shared her remarkable story on the Los Angeles Tribune's All Things Rex Worldwide Show.