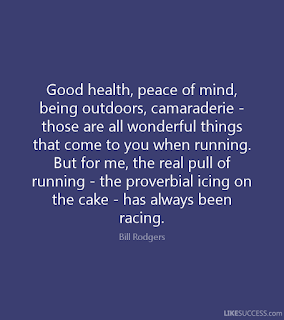 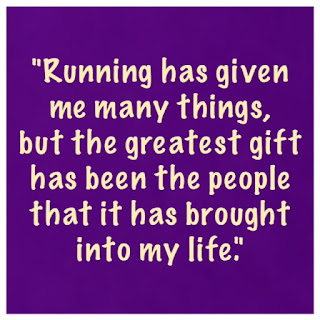 The alarm went off at 6:30 am. We meditated, did core work, had breakfast, asked Siri for directions to Belmont High School, and Tom and I were on our way to my first road race since January of 2018.

Siri took us through back roads from Brookline to Belmont. After we passed Belmont High School's main building, we saw tents and heard music playing in the distance. We parked our car and walked a short distance to where the action was. We picked up our bibs and awesome swag and walked around soaking up the pre-race atmosphere for the Fourth Annual Becca Pizzi 5K and 1 Mile Kids Fun Run. 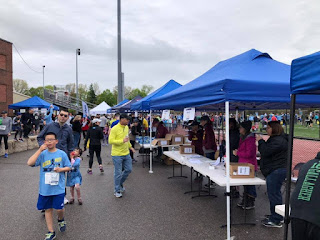 Becca is a Belmont native and proudly remembers her early running days at Belmont High School. As a result, Becca is dedicated to giving back to the community that supported and influenced her. All race proceeds benefit Belmont High student/athlete scholarships and the BHS athletic programs.

When I saw Becca, I was overcome with emotion (more on why in a later blog). She thanked Tom and me for supporting her race and for all the kind messages and blog posts I wrote prior to the race.

She said, "That's what we runners do. We support one another."

She went on to share how moved she is when she selects recipients of the athletic scholarships and how it makes such a difference in their lives. A group of adoring fans approached her and Tom and I went on our way.

We bumped into David Brown who we had not seen in a very long time. Those in the Boston area know him as a former meteorologist. He is now the Chief Advancement Officer for Mass Association for the Blind. When I worked at the VA, I had a close affiliation with the agency once known as VISION Foundation.

Scott and Kate Middlemiss arrived along with Jack who received a heart transplant in February of 2018 and his sister Gracie.

They were talking with Dave McGillivray and his son Luke.

We met up with other members of Team Big Heart including Kelly Allen McLay who I met in person for the first time at Cleveland Circle when Dave ran his 47th Boston Marathon just a few months out from open heart surgery. She was running the 5K and the 1 mile kids race with her daughter. 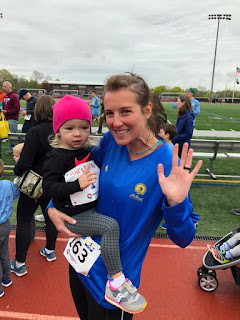 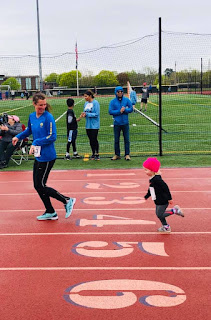 Dave, Becca and Kelly are all finishers of the 7 marathons on 7 continents in 7 days.

We watched the start of the kids race: 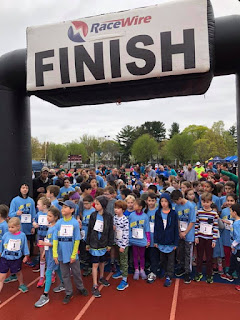 cheered them on as they ran and enjoyed seeing them with their medals: 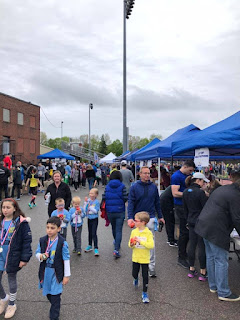 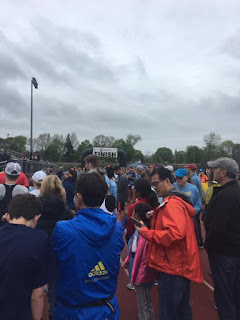 We decided that Kate, Jack, Grace, Tom and I would be walking partners for the 5K. Here are Jack and Gracie at the start: 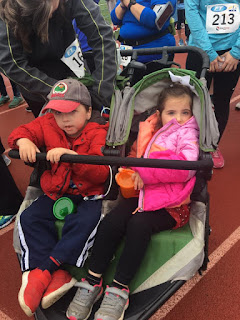 and a candid photo of Scott: 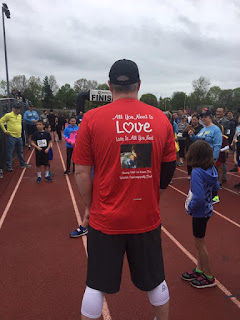 Scott tagged me in a Facebook post inquiring what members of Team Big Heart would be supporting Becca's event because she had supported the Joseph Middlemiss Big Heart Foundation. To learn more about Kate and Scott's foundation follow this link. I debated whether or not I was ready to toe another starting line ... I am absolutely thrilled with my decision to say yes!

It was a thrill to once again take a pre-race selfie with Tom: 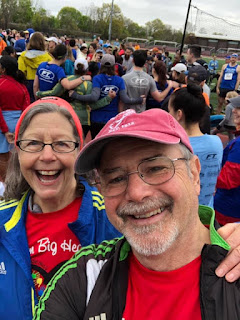 After the National Anthem, we were off.

I was in awe of Kate's stride and ability to push the double stroller with such strength. She confessed that she was concerned she'd slow us down so pushed her pace. We reassured her that it wasn't a problem at all.

Tom showed me our pace on his Nike+. We were going at a 16 minute/mile pace. Kate offered that she could speed up or slow down as we needed.

I told her how wonderful it felt to be out on a race course again pushing my pace and what a gift it was to share the day with her and her beautiful children!

Mile 1 mile marker happened really fast and Tom made sure we stopped to take water. Jack and Gracie were wonderful in their stroller pointing out different things they noticed along the course and joining in the conversation at times.

We stopped at the water stop at mile 1.5 and again at mile marker 2 before heading to the finish.

The conversation flowed with ease and there were plenty of volunteers out on the course to guide our direction so all we had to do was enjoy making our way through 3.11 miles through a beautiful Belmont neighborhood. I noted to Kate how the weather was perfect. No wind and no rain as predicted. We both acknowledged that Joseph was our weather angel!

The kids spotted a park that turned out to be "Joey's Park": 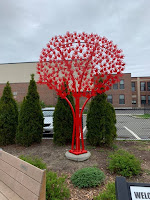 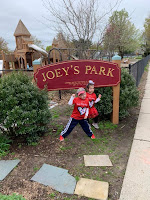 Kate explained that they are always on the look out for new playgrounds. Jack and Grace patiently waited until we finished the 5K to return to the playground!

As we were getting close to the finish Scott came running toward us to shrieks of delight "Daddy! Daddy!" from Jack and Grace.

I love it when a runner loops back to get us to the finish line. Scott noticed the same park that Kate, Jack and Grace noticed and they agreed they had to return there after the 5K!

"Hey come on Scott," Kate teased. "Mary and I are keeping a great pace." Scott was walking at a slower pace than we had been walking.

Scott took over the stroller and walked with Tom while Kate and I went ahead for a bit. It was wonderful to have "girl talk" time. Even though Kate and I met only recently, we feel as though we have known each other all of our lives. We can ask each other anything and talk about subjects that are near and dear to our hearts and souls.

As we entered the track toward the finish line, we were greeted by a woman who I 'met' on line who is friends with Kelly! Heather inspired a blog post, "The Sweet View From the Pack of the Pack." . She had finished her 5K but waited to see if she could find me. She ran ahead to meet us at the finish line!

Jack and Grace got out of the stroller to run to the finish.

I was in awe of how heart warrior Jack runs so fast. His coat was practically falling off and we took it so he would be free to run!

David Brown was kind enough to videotape our finish which also included Jack Middlemiss charging to the finish line. You can view the video by following this link. 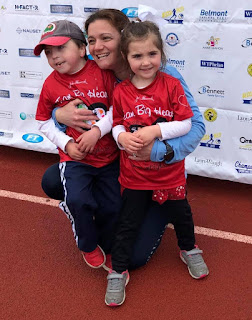 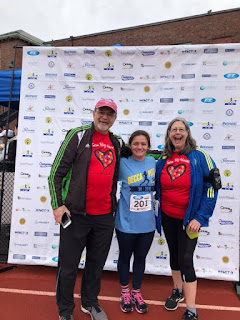 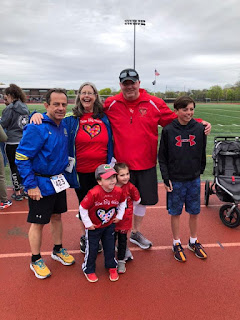 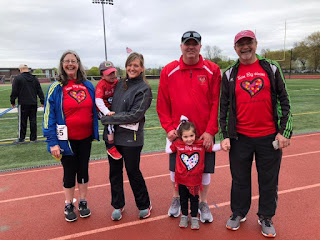 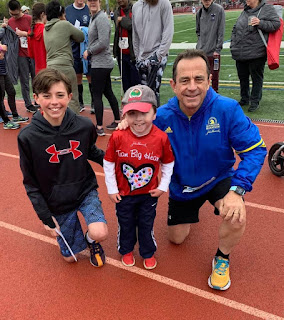 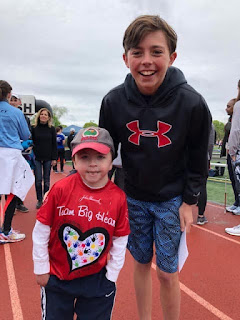 The circle of love of runners and Team Big Heart keeps growing as Heather was brought into the fold with her kind heartedness and connection to Kelly.

After photos were posted and videos shared with commentaries flowing back and forth, Heather posted this on Facebook:
Mary, the running community is the most inclusive and friendly group of people. It doesn’t matter how fast or slow someone is, how many 5ks or ultras a person has completed, their economic level or profession, we all toe the line and work our way to the finish.

A perfect quote to end a best day ever (as Joseph Middlemiss would say) and this race report.

From my heart to yours
In Health and Wellness,
Mary

My books are available on Amazon and at Paper Fiesta in Natick on Mile 10 of the Boston Marathon route.